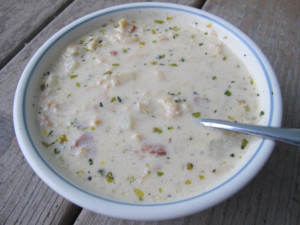 Clam chowder is a comforting soup and it’s very satisfying!

In a heavy bottomed stockpot saute’ the bacon until brown, then remove with a slotted spoon.  Saute’ the onion, carrots, celery and garlic in the bacon fat until softened, about 5  minutes.

Sprinkle the flour over the vegetables and stir over medium heat. It will make a roux that you will need to cook for 5-10 minutes to cook the flour taste out. It will look a little pasty but don’t worry!  When it starts to smell nutty (or like cookies), the flour is cooked and you can start adding the liquid.

I like to add the beer next because the foam loosens up the roux. Keep it over medium-high heat. Next, add the clam juice and the potatoes. Bring the mixture to a boil then add the milk and turn the heat down to medium. Add the clams, and their juice, the S & P and simmer covered,  until the potatoes are tender, about 30 minutes.  Keep an eye on the heat and stir occasionally to make sure potatoes aren’t sticking to the bottom and that you don’t burn the milk or you’ll RUIN the soup.

Depending on how thick you like your soup add the half & half AFTER the potatoes are cooked for extra richness. The cream can separate (curdle) if the heat is on too high so I add it at the end.

Hey, if you don’t care about calories you could add heavy cream instead!!!

DELISH TIP: *Dice the bacon while it’s frozen (or almost frozen) it will be SO much easier!!

Welcome to my site!